The airsoft motor is a key part of your AEG gearbox. It takes power from your battery and converts it into pew pew pew. However, there are 3 main types of motor out there (ignoring shaft length, ooh err) and it can be difficult to know which one to purchase to upgrade your AEG.

Stock airsoft motors are nothing special, they get the job done. They are the motors that you will get standard in most AEGs and they’re nothing to shout home about. These motors sit in the middle ground between speed and torque (more on this later). If you’re reading this, there’s a good chance that you’re looking to upgrade your motor from a stock one and you’re wondering which route to take. So we’ll ignore boring old stock motors from here on out.

High Torque airsoft Motors are designed to give the best ‘grunt’. They offer raw pulling (or twisting) power at the sacrifice of speed. Imagine a bodybuilder, they have a lot of strength and power but can’t run very fast. High torque motors are the trucks or 4x4s of the airsoft motor world.

High-speed airsoft motors are the opposite of high torque motors. They give very high RPM (revolutions per minute, in other words, speed), but give up strength. These are the supercars of the airsoft motor world.

What does this mean?

This means (as with everything in airsoft) it’s a game of tradeoffs. It makes it very difficult to have both a fast rate of fire and a high fps. A high FPS requires a strong spring, which is much harder to pull back and therefore requires a high torque motor, which isn’t as fast.

And that makes complete sense if you think about it like trucks and supercars. A supercar can get up to speed incredibly quickly (and a very high speed at that), but they can’t pull a lot of weight. A truck, on the other hand, takes a long time to get up to speed, but it can do it whilst pulling a lot of weight.

And this is where it can get a little confusing…

Gear ratios are where this can get a little bit confusing. A different gear ratio in an airsoft gearbox can make it so that your motor needs to turn less or more for one “shot” from the gearbox.

If you’ve ever ridden a bike or driven a car, you’ll understand that a lower gear (which is actually a higher gear-ratio) means that it’s easier to get moving.

It’s a simple matter of leverage. A lot of leverage (high gear ratios) mean you can apply a lot of “torque”, but more revolutions of the input gears are required to do it.

You can think of this like that 1st gear on a bike or car.

With first gear, you can pull a lot more weight, but you’re not going to be able to get anywhere very quickly and your motor is going to be spinning at top RPM.

Low ratio gears (labelled as high-speed gears) decrease the number of turns your motor needs to make for a full revolution of the gearbox.

If we continue with the car or bike analogy, that’s top gear. The ratio between the motor and the final-drive is closer to 1 to 1.

When the motor is going at maximum RPM, the vehicle (or airsoft gun if you’re tired of the analogy) is going very fast.

Which gear ratio to choose

Unfortunately, unlike bicycles or cars, our airsoft guns don’t have the luxury of being able to change gear-ratios to lower the motor’s RPM whilst maintaining speed. This means that we have to pick a gear-ratio that gives us the best performance with our chosen motor.

Pick a high-speed gear-set with a weak motor, and it’s going to take a noticeable amount of time to get up to speed. Pick a high-torque gear set with a powerful motor, and the motor’s going to be hitting maximum RPM with the gearbox barely spinning.

The most common mistake I see in airsoft…

The most common mistake I see when people build their gearboxes are people trying to pair high-torque gears with high torque motors.

If you match them together like that it’s like leaving a 4×4 in first gear. You’ve given it the best possible chance at pulling very heavy weight, but you’re never going to go faster than 10mph, even without the weight.

That’s like putting a Ferrari in 6th gear and trying to pull away. Sure it’ll do it and once it gets up to speed it’ll be going damn fast. But it’s not the most efficient (or fast) way of doing things. especially if you’re stop-starting, just like an airsoft motor does.

You need to alternate.

Which Airsoft Motor should I buy?

For the fastest rate of fire

For the fastest possible rate of fire, you need to do exactly what i said not to do above. Weird.

Pair a high-speed motor with some high-speed gears and you will have an airsoft gun with a very high rate of fire. You’ll have a motor that wants to go fast and gears that output a very fast speed.

The problem is, that it will take a noticeably slow amount of time to get there. Probably 2-5 shots before you’re gun’s firing at full tilt and your trigger response won’t be great.

However, if you ask too much of it (An FPS that’s too high), it will slow down below its potential. Typically, you’ll want to keep these kinds of builds below 300fps on 0.2g BBs and for spray-and-pray monsters, like LMGs.

For the highest possible FPS

For the highest possible FPS, you’ll want a high-torque motor with some high-torque gears. This will set your gun up to pull back ridiculous spring strengths. We’re talking over 1000fps on whatever BB you want.

More than likely, your gearbox casing would crack before that happened anyway. If you were to do this set-up with a reasonable spring, your trigger response would be abysmal. You would be able to count the seconds between pulling the trigger and the BB firing.

For the fastest trigger response

If you’re looking for a crisp instant trigger response that make airsoft a joy to play, there are two ways of going about it.

My go-to setup is a high-torque motor with high-speed gears. I can use this set-up anywhere between 300fps and 500fps with 0.2g BBs and get great trigger response and rate of fire.

What parts do I use?

Now, I am not affiliated with SHS in anyway, but i do love their motors and their gears. I have never had a single one fail on me. Their gears are strong, CNC steel and the motors are high-strength with Neodymium magnets (magic, as far as i’m concerned) and strong bevel gears. 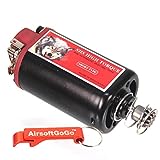 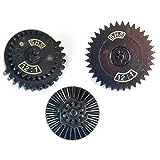 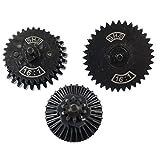 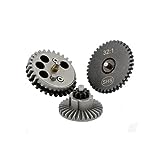 Other stuff I wrote